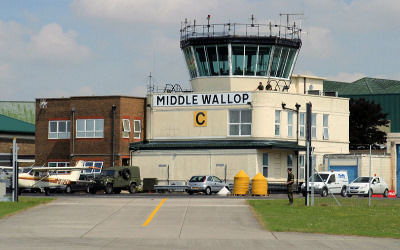 Middle Wallop in Hampshire is home to the Army Air Corps. The airfield is used for training and is where most Army Air Corps pilots begin their careers. It has the largest grass airfield in Europe and is situated close to major military centres such as Aldershot, Wilton, Bovington, and Tidworth.

Located beside the Army Air Corps Centre in Middle Wallop is the Museum of Army Flying which is dedicated to the history of flying in the British Army. The Museum covers the history of Army aviation from the Balloon sections of the Royal Engineers, through the establishment of the Royal Flying Corps in 1912 and Air Observation Post(AOP) Squadrons. It brings the story up to date with the establishment of the Army Air Corps in 1957, from the merger of the Glider Pilot Regiment and the AOP Squadrons.

Middle Wallop was a popular venue for air shows from the 1960s to 2000 and was known for its massed helicopter displays which usually featured over 100 helicopters which approached the crowdline from the distant horizon. There were also a couple of 'Music in the Air' displays held later, and also a small air display in 2008 called 'Wallop '08'.

Presently there are some smaller events at Middle Wallop including the 'Wallop Wheels and Wings' event.

Showcasing some of the finest classic aircraft and vehicles in the UK, Wallop Wheels and Wings, takes place at the Army Flying Museum and the Army Air Corps airfield in Middle Wallop on 2 July 2022.

Army Historic Aircraft Flight (AHAF)
Formed in 1980, the AHAF were permitted to maintain one example of of each aircraft that the Army Air Corps operated since the formation of the new Corps on 1 September 1957. The six different AHAF aircraft types had a combined regular service of 146 years and it was unique by being the only display team in the world to fly both fixed and rotary wing aircraft. 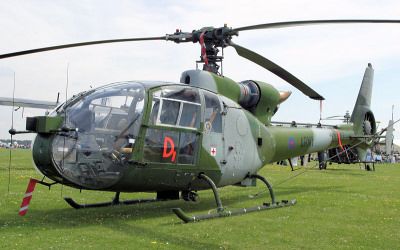 AAC Middle Wallop History
In 1940, during the Second World War, Middle Wallop was opened under control of Fighter Command. During the Battle of Britain Spitfires and Blenheims were operated here. Later in 1940, Beaufighters were used in the nightfighter role. In 1943, a number of fighter squadrons flew as bomber escorts and later that year elements of the USAAF IXth Fighter Command were based here, engaged in photo-reconnaissance duties using Spitfires and Mustangs.

RAF Fighter Command returned briefly in 1944 until the beginning of 1945 when it was took over by the Royal Navy and called HMS Flycatcher. In 1946 the RAF regained control of Middle Wallop as a fighter station. However it became increasingly involved with Army flying. In 1958, Middle Wallop was formally handed over to the Army Air Corps.

Today, AAC Middle Wallop is a British Army base which hosts 2 Regiment Army Air Corps and the Army Aviation Centre. It is used for training and is where most Army Air Corps pilots begin their careers.