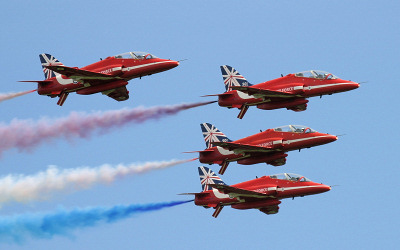 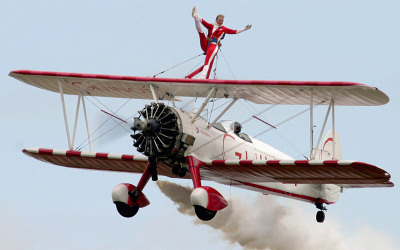 Southend History
The Southend Airshow first took place in 1986 as part of the Southend Spring Festival and was a one-day event. In 1988 Budweiser became the first sponsor of the show and Network South East took over the sponsorship in 1989. A preview day on the Sunday was introduced in 1990. The first two-day Airshow was introduced in 1991. In 1994, the sponsor changed from Network South East to LTS Rail. At 1998's event, Richard Noble brought the then fastest car in the world "Thrust" to show the crowds, which in 1997 had travelled at 736 mph across the Black Rock Desert in Nevada. In 2000, LTS Rail became C2C. The show included the first visit by the Italian Air Force Display Team the Frecce Tricolori and C2C even brought one of its new trains along and parked it on Western Esplanade! Westcliff Casino took over the sponsorship in 2001.

The Southend Airshow or 'Southend Festival of the Air' as it was also called, was the largest free air show in Europe with more than half a million people lining the town's seven-mile shore over the two day spectacular. There was a large display exhibitors plus a market and craft fayre with the ground attractions cover more than a mile of the seafront.

The airshow was usually held at the end of May during Sunday and Bank holiday Sunday. Many of the display aircraft operated out of nearby London Southend Airport. The airport sometimes had Open Days during the Southend Airshow so that people could see the aircraft at close quarters and see its resident Vulcan (XL426) doing a taxi-run.

The last Southend Airshow was held in 2012, and it was cancelled in 2013 due to austerity cutbacks by Southend Council.

The Southend Airshow was the largest free air show in Europe and was regularly held at the end of May during Sunday and Bank holiday Sunday.

In 2013, Southend Borough Council announced its intention to cancel the event citing budget cuts and lack of sponsorship. In response to this announcement Thomas Curtis and John Delaney formed a campaign to try and save the airshow, even attempting to seek an alternative venue, but were ultimately unsuccessful and it was announced in 2015 that the Southend Airshow would not return. 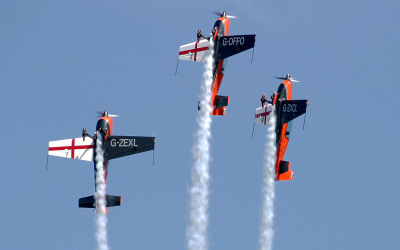 End of the runway

As you know, a few months back we hit a roadblock in our 2015 event. Although most aspects of the event were proceeding apace (we had secured an great flight card including the Red Arrows and the last display of the Vulcan among others), we were forced to relocate the event due to unexpected costs from Southend Council and related services.

Since then we have been working all hours to locate a suitable venue both in and out of Southend for this years event. This was a controversial act however, we decided that not trying to save this event would have been a mistake and the fact that we were so close meant that we would have regretted not at least making the attempt.

I wish we could say today that we had secured that venue and we would have an Airshow this year but that is not the case. Although negotiations with great a location were developing, we could not get it signed by last Friday when a deadline placed upon us for RAF commitments expired.

This has been a two year project to return an Airshow to our seaside town. A labour of love that has meant evenings and early mornings. One that has taken hundreds of hours of our personal time away from friends and family (I remember being on the radio to promote the campaign on the due date of my first child.) and required vacations from work.

We now have to face the reality that although there may be other Airshows in Essex in the coming years, we will not have an Airshow in Southend.

Its been quite a journey, from two people and a Facebook campaign to a team of nearly twenty and over twenty thousand supporters. To those that donated to the cause we thank you and we will we will donate that money to our nominated charities. To our sponsors I would like to thank you for your assistance and aid. To our community, I apologise for letting you down, it was your support that even made this crazy idea a remote possibility.

Though we were ultimately unsuccessful I stand by our effort, I still believe in Southend and think that is a fantastic town, one that has so much to offer. It is just a shame that we will not have a marquee event to promote it.