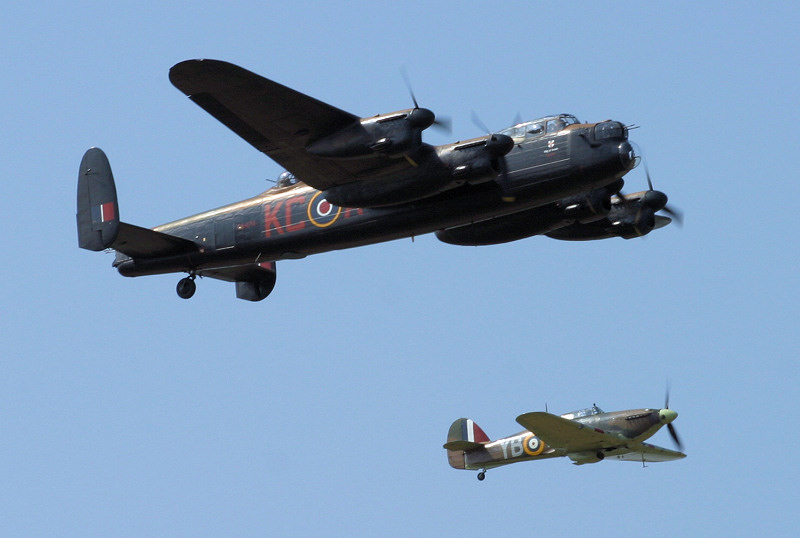 Below are the 2020 display dates & venues for the Battle of Britain Memorial Flight (BBMF):

This morning (30.4.20), on his 100th birthday, two aircraft from the RAF's BBMF flew over his house to mark the occasion. Hurricane LF363 was flown by Sqn Ldr Mark Discombe (OC BBMF) and Spitfire MK365 by Flt Lt Andy Preece (BBMF Ops Officer). They completed three passes before returning to their base at RAF Coningsby.

The BBMF schedule is usually announced at the end of March each year. Press Releases:
Impact of Coronavirus (COVID-19) on RAF Display Teams in 2020

The Battle of Britain Memorial Flight or BBMF presently consist of twelve aircraft:- 6 Spitfires, 2 Hurricanes, Lancaster, Dakota, and 2 Chipmunks. They are operated by the Royal Air Force and have been based at RAF Coningsby in Lincolnshire since 1976. The BBMF participate in scores of Air Displays and events every year.

The display crew and groundcrew are all volunteers drawn from the Royal Air Force. The Flight routinely makes over 700 individual aircraft appearances during a year, ranging from major air shows to village fetes. The BBMF are usually represented at air shows with the Lancaster flanked by a Spitfire and Hurricane.

BBMF Tracker:
Click the links below to see if one of the BBMF aircraft are in the air (Planefinder):