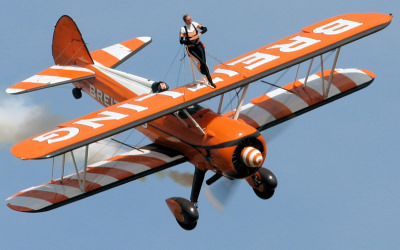 The AeroSuperBatics Wingwalkers are the world's only formation Wing-walking Team using up to five Boeing Stearman aircraft, and are based at Rendcomb in Gloucestershire.

The aircraft display a breathtaking sequence of loops, rolls and turns while wingwalkers wave and perform handstands against 150mph wind pressure. The wingwalkers also get back into the cockpit after their display while the aircraft is still in flight. 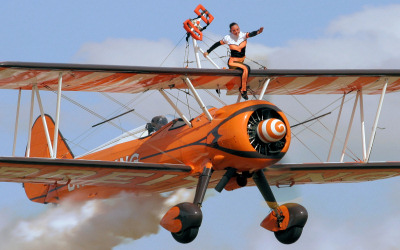 History
Wingwalking dates from the romantic era after the First World War when young pilots returned home exhilarated from their adventures in the sky, keen to earn a living in the clouds.

These daring heroes purchased surplus war biplanes cheaply and travelled the country captivating civilians with the opportunity of flying, landing in fields and charging locals for their first taste of flight. To capture the imagination of potential customers the pilots flew down the main street of each town at low level and persuaded girlfriends and engineers to climb out along the wing of their aircraft.

Now over 80 years later, the Breitling pilots are celebrating the passion of those early adventurers. Pulling up to 4G (4 times their own body weight) they loop, roll and turn the biplanes through the sky with deliciously daring wingwalkers waving and performing handstands on the wing against 150 mph wind pressure!

The Breitling Wingwalkers are seen live by over 6 million spectators each year in the UK alone. They also display in many different countries around the world.

With the seven-year deal with watch-maker 'Breitling' at an end the team is currently called 'The Flying Circus'.

You can purchase a wing-walking experience by visiting the official website at: https://gowingwalking.com/