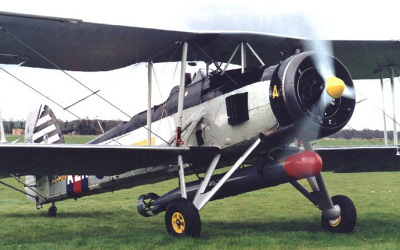 The Royal Navy Historic Flight is based at Yeovilton in Somerset. The Flight was established at the Royal Naval Air Station Yeovilton in 1972 in order to preserve Naval heritage, and to be a living memorial to all Fleet Air Arm personnel, especially those who gave their lives in maintaining the freedom of our nation.

The Royal Navy Historic Flight, which has flown the flag for the Royal Navy at air shows and public events around the country for nearly 50 years, stands down on 31 March 2019.

Responsibility for maintaining and flying the aircraft is expected to transfer to the charity 'Navy Wings', securing their long-term future flying as civilian rather than military aircraft. 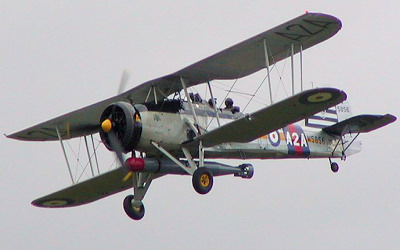 The Swordfish evolved from the prototype Fairey TSR.II (Torpedo Spotter Reconnaissance), designed by Marcel Lobelle and HE Chaplin of the Fairey Aviation Company Ltd., first flew in 1934 and entered service with No.825 Squadron in 1936. In all, 2391 aircraft were built, the first 692 machines by Fairey Aviation and the remainder under licence by Blackburn Aircraft Company at their works at Sherburn-in-Elmet and Brough, Yorkshire. In service the Blackburn-built aircraft became unofficially known as "Blackfish".

W5856, a "Blackfish" built by Blackburn Aircraft at Sherburn-in-Elmet, first flew on Trafalgar Day (21 October) 1941. Bought by British Aerospace for presentation to the Swordfish Heritage Trust, the partly-restored airframe went to BAe Brough for complete restoration to flying condition, the work being completed in 1993. In September 1996 W5856 was adopted by the City of Leeds and now proudly wears the City's coat of arms and name on her port side just forward of the pilot's cockpit. 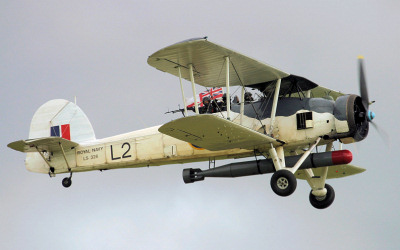 Perhaps the most remarkable aspect of this very distinguished aircraft was its longevity. Although by all normal standards it was already obsolete at the outbreak of WW2, it confounded everyone by remaining in operational service throughout the whole of the war, and thereby gained the distinction of being the last British bi-plane to see active service. Indeed, it outlasted its intended replacement, the Albacore, which disappeared from front-line service in 1943.

LS326, also a 'Blackfish', was built in 1943 at Sherburn-in-Elmet. In 1959 LS326 was repainted for a starring role in the film 'Sink the Bismarck!'. In September 1960 she was presented to the Royal Navy by the Westland Aircraft Company and has been flown ever since. Since 1987 she has worn her original wartime colour scheme for North Atlantic convoys with 'L' Flight of 836 Squadron. Following extensive work by BAeS Brough to her wings, LS326 flew again on 1 July 2008 for the first time in nine years. LS326 was adopted by the City of Liverpool, the name she proudly wears on her port side.

Originally designed by the Hawker Aircraft Company, the Sea Hawk F.1 first entered front-line service with 806 Squadron in 1953 (later referred to as "Ace of Diamonds" due to the Ace of Diamonds emblem on the aircraft fuselage). Later saw action in the Suez crises of 1956. After Suez, the Sea Hawk's days were numbered and they began to phase out of operational service in 1958, being replaced by the much larger and more potent Supermarine Scimitar. The Sea Hawk also saw export success, seeing service with the Marineflieger in West Germany, Dutch and Indian Navies, with the latter only replacing their aircraft as late as 1983.

The Royal Navy Historic Flight's Sea Hawk WV908 was built at Baginton, Coventry, in late 1954 as an FGA.4 variant and assembled at the company's Bitteswell airfield before being delivered to the Royal Navy in February 1955. After a period of storage she re-flew briefly in 1989 before being taken to British Aerospace's Dunsfold works for a complete refurbishment which was completed in 1996. She is now currently the only airworthy Sea Hawk in the world. 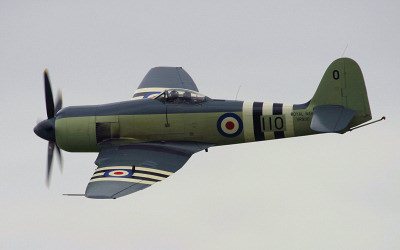 The Sea Fury was the Fleet Air Arm's last piston-engined fighter to serve in front-line Squadrons. The prototype Sea Fury first flew on 21 February 1945 and carried out deck landing trials in HMS Ocean in October of that year. The first production aircraft (Mk.F.10) flew on 15 August 1946 and fifty aircraft were built, followed by 615 Sea Fury FB.11s, the last of which came off the production line in November 1952. When the Korean War broke out in 1950, the Sea Fury was the Fleet Air Arm's leading single-seat fighter, and it fought with great distinction during the conflict.

VR930 was delivered to the Royal Navy at RNAS Culham in March 1948, she then spent from May to December of that year in front-line service with 802 Squadron aboard HMS Vengeance and ashore at RNAS Eglinton. British Aerospace's Brough works restored her to flying standard, eventually joining the RNHF in 1998 in pristine condition. VR930 now wears her authentic, original 802 NAS code of '110/Q' as worn when she first joined the unit at the shore base of RNAS Eglinton, Northern Ireland, and embarked in HMS Vengeance in 1948. This early scheme was applied to all F.10 and the early FB.11 aircraft. 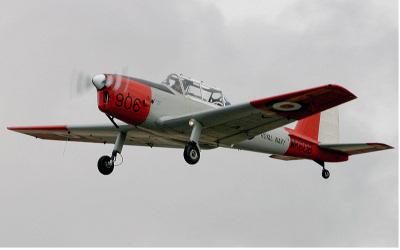 The DHC-1 Chipmunk was the first aircraft to be designed and built by de Havilland Aircraft of Canada Ltd. Intended as a Tiger Moth replacement in the basic training role, it made its first flight from Toronto on 22 May 1946. Production was soon started in the UK, initially at Hatfield and later transferring to Chester, to provide the Royal Air Force with an ab-initio trainer designated as the T.10.

Chipmunk T.10 WK608 was built by the de Havilland Aircraft Company at Chester and, following early service with the Royal Air Force, entered service with the Royal Navy's Britannia Flight at Roborough (now Plymouth City Airport) in June 1966. She served with the unit until retirement of the type from service in 1993, transferring to the RNHF at Yeovilton in July of that year, thus becoming the last flying example of the type in RN service.

Unlike the remainder of the RNHF aircraft, WK608 is not displayed on the airshow circuit and doesn't get a winter break either, being used for continuation training throughout the year and providing the display pilots with much valued tailwheel experience.