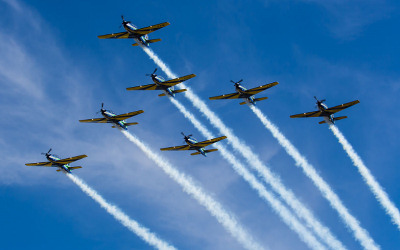 History
The Esquadrilha da Fumaca was formed on May 14, 1952 when they performed their first official exhibition over Copacabana beach using the North American T-6 Texan.

Ever since, thousands of people have been having an exciting opportunity to be in touch with the pilots expertise, and the competent team of mechanics that support them, and it wakes up, in this way, the recognition, the admiration and the respect of the Brazilian Air Force.

In 1968 the North American T-6 Texan was replaced by the French Aerospatiale (Fouga) CM.170-2 Super Magister jet, called T-24 by the Brazilian Air Force. However, this model proved unsuitable to Brazilian conditions and, in 1972, the squadron reverted to the T-6 Texan, which was used until 1977. The team was disbanded in 1977, but reformed in 1983 using Neiva T-25 Universal piston-powered aircraft, and later replaced by the Embraer EMB-312 Tucano turboprop trainer. They presently use the Embraer EMB-314 Super Tucano.

The mission of the Esquadrilha da Fumaca Air Demonstration Squadron is to bring together civilian and military aeronautical communities, to contribute for a better integration between the Air Force and the other Armed Forces, to represent the Brazilian Air Force in popular events in Brazil and abroad, to bring youngsters to the civilian and military aeronautical careers, to show the quality of the Brazilian aerospace industry, and to show the capabilities and high level of training of the Brazilian Air Force crews.