Queen Elizabeth Aircraft Carrier - CC-BY-SA-3.0 / Brian Burnell
HMS Queen Elizabeth and her Strike Group:
The Queen Elizabeth Carrier Strike Group (CSG21) will deploy to the Mediterranean, Middle East and Asia-Pacific in Spring 2021 and will visit more than 40 countries including India, Japan, Republic of Korea and Singapore, during a 28-week deployment spanning 26,000 nautical miles with 3,700 sailors, aviators and marines.

The Aircraft Carrier along with other ships of the Strike Group left Portsmouth Harbour on Saturday 1st May 2021 to take part in Exercise Strike Warrior for two weeks of intensive training, ahead of their Asia-Pacific deployment.

Defence Secretary Ben Wallace said: 'When our Carrier Strike Group sets sail next month, it will be flying the flag for Global Britain - projecting our influence, signalling our power, engaging with our friends and reaffirming our commitment to addressing the security challenges of today and tomorrow.'

'The entire nation can be proud of the dedicated men and women who for more than six months will demonstrate to the world that the UK is not stepping back but sailing forth to play an active role in shaping the international system of the 21st Century.'

There will be thirty two jets and helicopters onboard HMS Queen Elizabeth & Escort vessels:

Supporting below deck will be a company of Royal Marine Commandos. Schedule:
Following Exercise Strike Warrior (8-20 May 2021), HMS Queen Elizabeth will return to Portsmouth for final preparations before departing (23 or 24 May 2021). The Strike Group will take part in joint exercises with NATO partners in the Eastern Atlantic before visiting Gibraltar. On the Mediterranean leg of the deployment the Carrier Strike Group will provide a period of dual carrier operations with the French Aircraft Carrier Charles De Gaulle and with NATO allies.

Before entering port at Souda Bay, Greece, for a logistic stop, a Type 45 destroyer, and a Type 23 frigate will detach from the group and enter the Black Sea. The Strike Group will then transit the Suez Canal and stop at the British military port in Duqm, southern Oman, after which it will sail across the Arabian Sea to an, as yet unknown, Indian port. They will conduct exercises with the Indian Navy in the Indian Ocean, then proceed for a brief stop at the British naval facility in Singapore.

They will then enter the disputed South China Sea region to conduct freedom of navigation exercises in the area. Subsequently, the group will pay a visit to South Korea and then conduct exercises with the Japan Maritime Self-Defense Force and United States Navy around the islands of Japan. Close to the end of the voyage, the group will take part in Exercise Bersa Lima 21 with the Royal Australian Navy, Royal New Zealand Navy, Royal Malaysian Navy and Republic of Singapore Navy, to celebrate the 50th anniversary of the Five Power Defence Arrangements.

During the deployment, air and maritime forces from Australia, Canada, Denmark, Greece, Israel, India, Italy, Japan, New Zealand, Oman, the Republic of Korea, Turkey and the UAE will operate alongside the Carrier Strike Group. 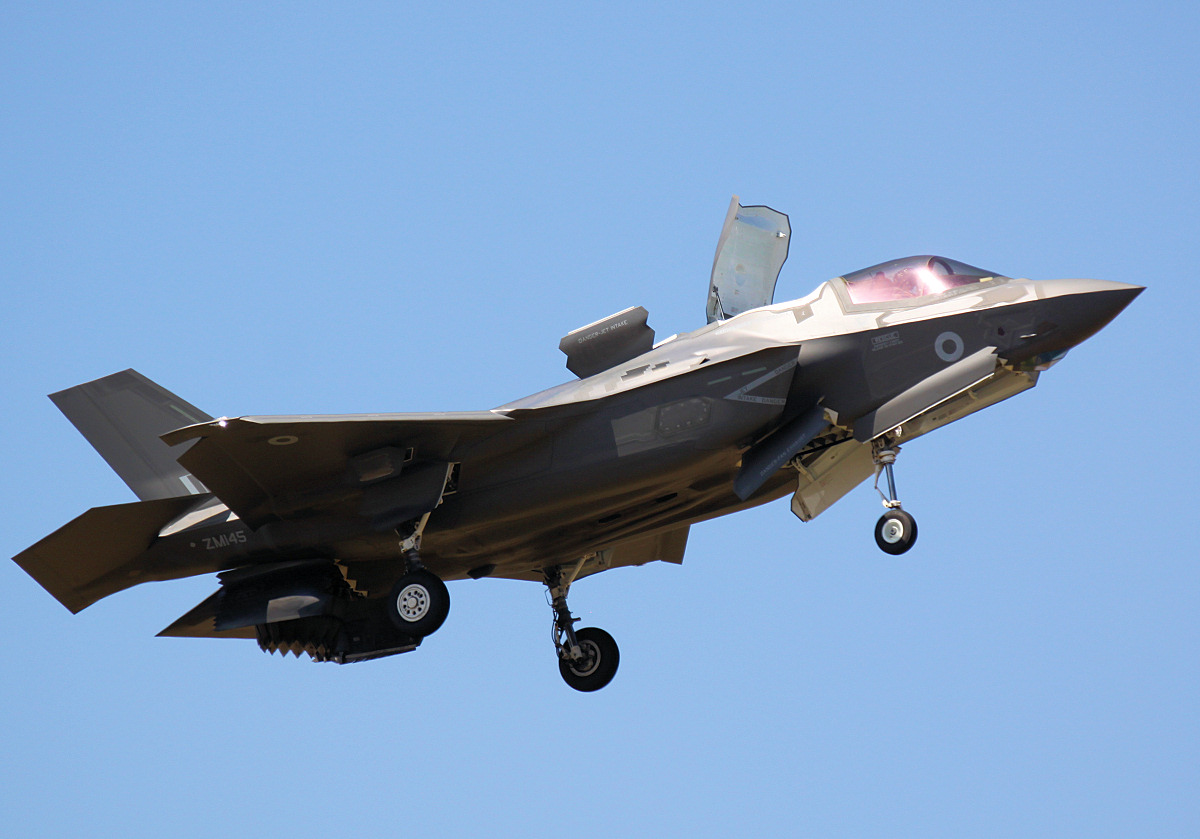 The UK F-35s from 617 Sqn and USMC F-35s from VMFA-211 Sqn will take part in training and pre-deployment preparations in home waters, leading up to Exercise Strike Warrior in May 2021 (off the coast of Scotland) and will then deploy on HMS Queen Elizabeth on her first operational mission to the Pacific. USMC F-35 (VMFA-211 Sqn) previous visit in September 2020:
VMFA-211 Squadron 'Wake Island Avengers' had previously come over to the UK (169620/CF-00, 169621/CF-01, 169587/CF-02, 169588/CF-03, 169589/CF-04, 169607/CF-06, 169608/CF-07, 169610/CF-08, 169614/CF-09 and 169414/CF-25) in September 2020, landing at RAF Marham, where they worked alongside 617 Sqn initially conducting synthetic training in Marham's purpose-built simulators to familiarise themselves with the local airspace and procedures before they took to the Norfolk skies to fly training sorties with 617 Squadron. They took part in Exercise Point Blank with their colleagues from RAF Lakenheath along with other NATO partners before deploying to HMS Queen Elizabeth for Exercise Joint Warrior where they conducted aircraft carrier qualification training to ensure that all pilots were proficient to operate from the carrier during both day and night. Merlin Helicopters & Crowsnest:
There will be seven Merlin HM2 anti-submarine helicopters onboard HMS Queen Elizabeth from 820 Naval Air Squadron based at RNAS Culdrose. As well as being used in the anti-submarine role they will also be able to deploy the new powerful Crowsnest radar for Airbourne Early Warning. Three Merlin HM2 helicopters (ZH843, ZH846 & ZH856) will be used for the Airbourne Early Warning role and four Merlin HM2 helicopters (ZH824, ZH827, ZH841 & ZH857) for the anti-submarine role.

There will also be three Merlin HC4/4A helicopters (Commando Helicopter Force, ZJ121/E, ZJ127/L & ZJ129/N) from 845 Naval Air Squadron based at RNAS Yeovilton and these helicopters are used by the Royal Marines. Wildcat Helicopters:
Four Wildcat HMA2 Maritime attack helicopters (ZZ514, ZZ518, ZZ530 & ZZ535) from 815 Naval Air Squadron based at Yeovilton will deploy to the Escort ships - HMS Diamond Destroyer (201 Flt), HMS Defender Destroyer (219 Flt), HMS Richmond Frigate (202 Flt) and HMS Kent Frigate (206 Flt). These helicopters have an anti-submarine role as well as an anti-surface warfare, force protection and counter-piracy role. Each helicopter can carry up to twenty new Martlet missiles to protect the Carrier Strike Group. Exercise Strike Warrior 21:
Exercise Strike Warrior will run from the 8th May to the 20th May 2021 off the Scottish northwest coast. The exercise brings together the Royal Navy, British Army and Royal Air Force to undertake realistic exercises alongside our closest allies across a range of military operations from warfighting to sea control and maritime security.

Involved in Exercise Strike Warrior will be 27 ships, 3 submarines and 84 aircraft from 11 nations and will involve 8,000+ personnel. At the end of the exercise HMS Queen Elizabeth and her Strike Group will be passed as ready for its first operational deployment to the Mediterranean, Indian Ocean and East Asia.

HMS Queen Elizabeth returned to Portsmouth on 19th May 2021 to stock up on supplies. She received a farewell visit from Her Majesty The Queen, on Saturday 22nd May 2021, for the ship's company, as they prepared to embark on the aircraft carrier's maiden operational deployment. Queen Elizabeth Carrier Strike Group (CSG21) Deployment:
HMS Queen Elizabeth set off from Portsmouth at dusk on Saturday 22nd May 2021 and will join up with her Strike Group on her maiden operational deployment to the Indo-Pacific region.

HMS Queen Elizabeth and her Strike Group have joined with the French carrier 'Charles de Gaulle' in the Western Mediterranean Sea for Exercise Gallic Strike which takes place over three days in June 2021.

Exercise Falcon Strike 21 - 7 to 15 June 2021
F-35s aboard HMS Queen Elizabeth have participated in Exercise Falcon Strike 21, a multi-national training exercise led by the Italian Air Force. It saw F-35 Lightning stealth fighters from four nations train together for the first time. Centred on Amendola Air Base, in Italy, the exercise provided a unique opportunity for partners and allies to work together operating the advanced stealth aircraft. More info here.

Carrier Strike Group joins the fight against Daesh (22.6.21)
The UK's Carrier Strike Group has joined the fight against Daesh with F-35 Lightning jets carrying out their very first combat missions from HMS Queen Elizabeth. Stealth jets of 617 Dambusters Squadron RAF carried out operational sorties from the carrier in support of Operation Shader and US Operation Inherent Resolve. Defence Secretary Ben Wallace said: "The ability to operate from the sea with the most advanced fighter jets ever created is a significant moment in our history, offering reassurance to our allies and demonstrating the UK's formidable air power to our adversaries." More info here.

Suez Canal Transit (6.7.21)
HMS Queen Elizabeth and her Carrier Strike Group transitted the Suez Canal on Tuesday 6th July 2021. More info here. However, the Royal Navy Destroyer 'HMS Diamond' experienced some technical issues and had to detach from the Carrier Strike Group for maintenance, inspection and any necessary repairs. The destroyer did not go through the Suez canal but instead came alongside the NATO pier in Augusta, Sicily. She is expected to rejoin the Strike Group later. The Astute Class Nuclear Attack Submarine 'HMS Artful' worked with the Strike Group in the Mediterranean Sea before heading back to the UK while another Astute Class Nuclear Submarine then joined the Group East of Suez.

Royal Navy task group sails with three navies near Strait of Malacca (5.8.21)
The Queen Elizabeth Strike Group has passed through the Strait of Malacca (between Malaysia and northern Indonesia), rendezvousing with a number of navies along the way including Malaysian frigate KD Lekiu before meeting up with Singapore frigate RSS Intrepid, corvette Unity and landing platform dock Resolution. HMS Richmond also carried out training with a frigate from Thailand while Royal Fleet Auxiliary tanker RFA Tidespring went alongside in Singapore to take on supplies. HMS Defender sailed ahead of the Carrier Strike Group to conduct defence engagement with Brunei. More info here.

Port call at U.S. Naval Base Guam (6.8.21)
The aircraft carrier HMS Queen Elizabeth and its strike group made a port call on Friday 6.8.21 at U.S. Naval Base Guam, one of the group's many stops as it moves across the Indo-Pacific. Royal Navy Commodore Steve Moorhouse, commander of the strike group, said 'Our visit to Guam provides an opportunity for some much-deserved rest and recreation. We are grateful to the U.S. Navy for the use of their facilities, and we look forward to exploring this beautiful Pacific Island.' More info here. The Astute Class Nuclear Submarine attached to the Strike Group has docked in Busan, South Korea on 11 August 2021.

Royal Navy task group's firepower unleashed on Pacific ranges in two-day blitz (20.8.21)
HMS Queen Elizabeth, HMS Kent, HMS Defender and HNLMS Evertsen of the Carrier Strike Group linked up with the Expeditionary Strike Group 7 and the 31st Marine Expeditionary Unit in the Philippine Sea in waters close to an uninhabited tropical island for two days of intensive gunnery training. The windswept Farallon de Medinilla outcrop - in the middle of the Mariana Islands in the western Pacific - was struck by weapons fired from three F-35 jet squadrons (two from HMS Queen Elizabeth and the other from amphibious assault ship USS America) and the naval guns of HMS Kent, Defender and HNLMS Evertsen. More info here.

The Carrier Strike Group take part in Exercise Noble Union (24.8.21)
The Carrier Strike Group is taking part in EX Noble Union, which sees Japan, US and CSG21 integrated and operating together. Amphibious assault ship USS America and Aircraft Carrier JS Ise (Hyuga-class helicopter destroyer) are operating alongside the Queen Elizabeth Strike Group. An F-35B Lightning jet from the British carrier also landed on USS America as UK and US squadrons from both ships worked closely together, while helicopters from around the task group learnt to operate seamlessly with ships from allied nations. More info here.

Carrier Strike Group work with USS Carl Vinson and also the Republic of Korea Navy (Sept 2021)
The USS Carl Vinson and HMS Queen Elizabeth's air wings put on an impressive display of air power, as jets from the carriers trained to work seamlessly together by practising techniques, tactics and procedures, which included mid-air refuelling. It saw the two F-35B Lightning jet squadrons from Queen Elizabeth work closely with four F-35C Lightnings, five F/A-18 E/F Super Hornets, two EA-18G Growlers and a E-2D Advanced Hawkeye from USS Carl Vinson. The Carrier Strike Group also worked alongside ships from the Republic of Korea Navy during three days of events near Busan, which included joint maritime manoeuvres, with Commander of the UK Carrier Strike Group, Commodore Steve Moorhouse, thanking the ROK for "their enthusiastic support to the CSG21 deployment". Meanwhile, HMS Richmond has stopped in Guam for a reset and HMS Diamond will head through the Suez Canal shortly to deliver operations supporting the Carrier Strike Group after repairs were completed in Taranto in Italy. More info here.

• More information on the Queen Elizabeth Aircraft Carrier can be found here. 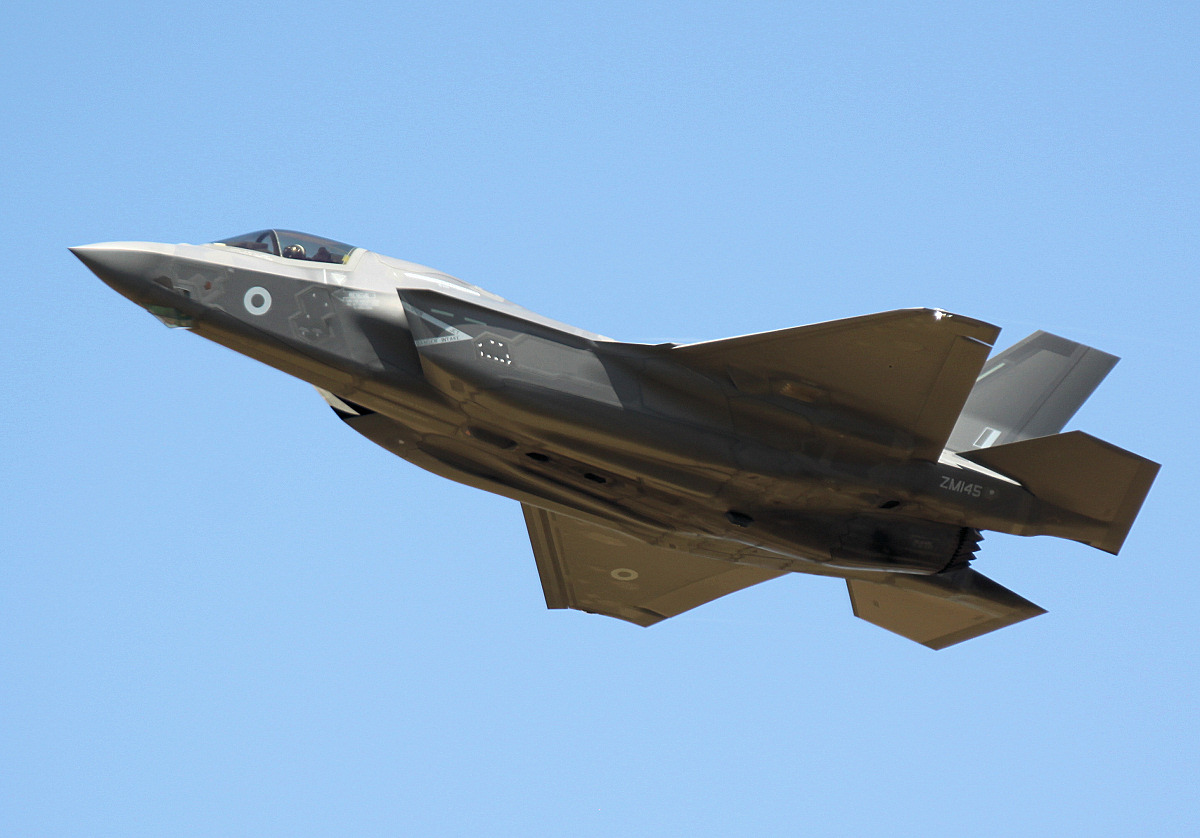 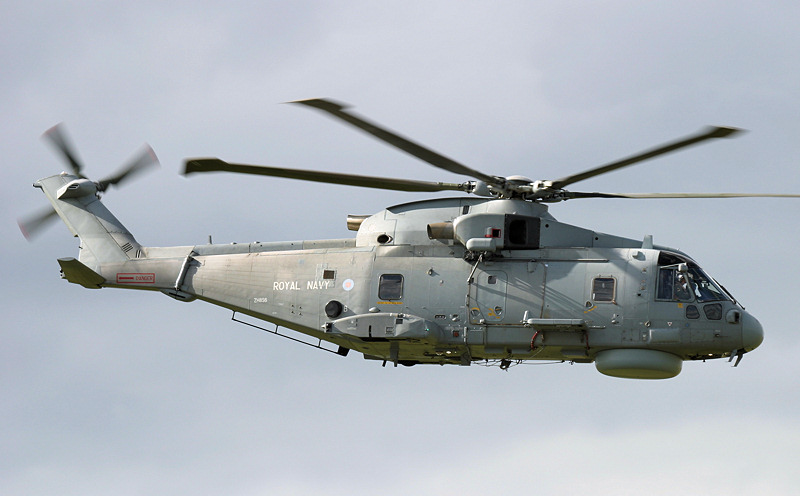 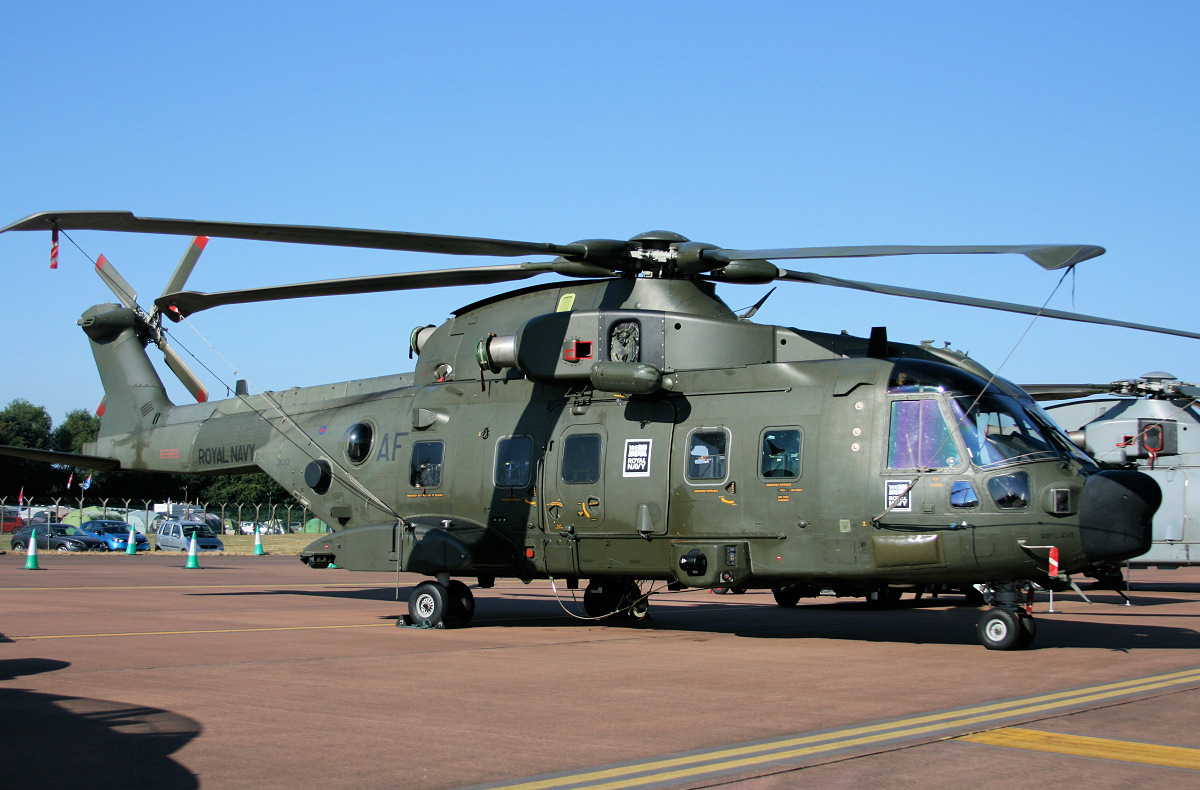 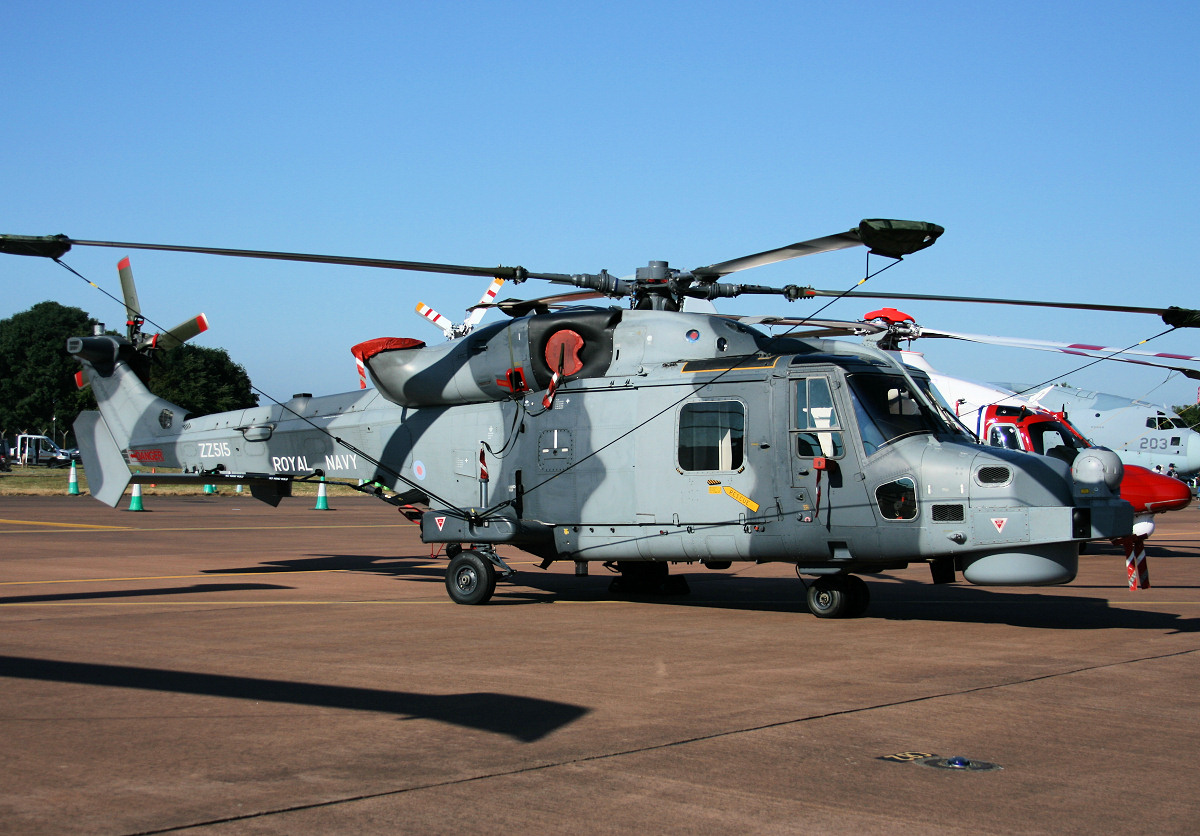 
Nine ships, more than 30 stealth fighter jets and helicopters and around 3,700 personnel have sailed this weekend as part of the #UKCarrierStrikeGroup. Their global deployment will take them 25,000 nautical miles to 40 nations and across three oceans.