A highly successful Royal International Air Tattoo 2016 at RAF Fairford in Gloucestershire ended with the crowning of the airshow's 'Top Guns' at the traditional Sunday night hangar party. 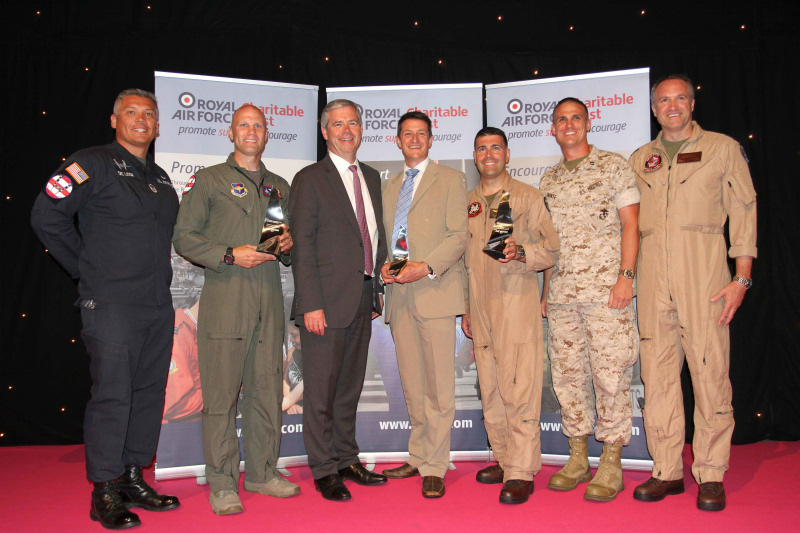 The ceremony was introduced by Air Marshal Sir Kevin Leeson, chairman of the Royal Air Force Charitable Trust. HRHPrince Feisal of Jordan presented the first of the evening's trophies, the King Hussein Memorial Sword, in memory of the late HM King Hussein, patron of the International Air Tattoo from 1983-89. Awarded for the best overall flying demonstration, it was presented to the Croatian Air Force aerobatic team, the Krila Oluje (Wings of Storm). This was the first appearance of the Krila Oluje, flying six Pilatus PC-9M turboprop trainers, and of the Croatian Air Force at a British display. The award was bestowed for, in the words of the citation, "Precision aerobatics in challenging conditions incorporating novel manoeuvres". Team leader Lt Col Damir Barisic said: "We are very happy to be among all these friends, all these people who share the same passion for 'old-school' flying in these days when everything is becoming unmanned and automatic. Of course it's a big honour to receive such an award, especially on the first occasion we've been here."

The best individual flying display was adjudged to be that given by Capt Peter Fallen of the Swedish Air Force in the JAS 39C Gripen. He was presented with the Sir Douglas Bader Trophy by RAFCTE chairman and RAFCT Trustee Alan Smith for "a faultless, flowing and dynamic flying display". "I'm so happy", said Peter. "I didn't expect it, because you try to do your best all the time."

The recipient of the RAFCTE Trophy, presented for the best flying demonstration by an overseas participant, was the French Air Force Ramex Delta team comprising two Mirage 2000N nuclear strike aircraft. The citation said that they put on "a superbly co-ordinated and choreographed pairs tactical demonstration". This was an emotional occasion for Ramex Delta, as RIAT was their final ever display - the team is being disbanded. One of the pilots, 'Pierrot', said afterwards: "We are very proud, because it was very special to attend this year's RIAT. This was our last airshow ever, and it was a great deal of pleasure for us to fly today. For us - the pilots, the team, the squadron - it's a special honour because this year is the 100th anniversary of our squadron, the 'La Fayette' squadron. It's a good ending to the incredible experience that was Ramex Delta."

The night was a double success for Ramex Delta, as the Mirage 2000N they displayed in, which featured a special colour scheme to mark the 'La Fayette' squadron centenary, won the award for best livery as voted for by the Friends of the Royal International Air Tattoo (FRIAT). It was presented by Tim Griffiths, Key Account Manager for Jeppesen.

Turning to the 'home team', the Steedman Display Sword is presented by the Royal International Air Tattoo in memory of the late Air Chief Marshal Sir Alasdair Steedman, chairman of the International Air Tattoo (1981-1988) for the best flying demonstration by a UK participant. The winner was BAE Systems test pilot Nat Makepeace for his routine in a Eurofighter Typhoon FGR4, displayed with a full underwing weapons load to represent the upcoming Phase 3 Enhancement configuration for the type. In the judges' view, this was "a powerful demonstration of the capabilities of the Eurofighter Typhoon in representative operational swing-role fit." In Nat's absence, the trophy was collected by Sir Kevin.

The As The Crow Flies trophy for the best overall flying demonstration as judged by members of FRIAT was presented by RAFCTE Non Exec Director Jim Glover and presented to Major Dan 'Rock' Dickinson from the US Air Force Air Combat Command F-22 Raptor Demonstration Team. 2016 was the first time for six years that the F-22A had displayed at the Air Tattoo, and once again the thrust-vectoring air superiority fighter proved a stunning performer. In 'Rock's' words, "First of all, we're honoured to be here. There are so many professionals here, and to share the stage amongst all the great pilots and crews, not to mention all the people who put on this awesome airshow. It's humbling, but at the same time we're super-excited."

A special presentation by Air Tattoo Chief Executive Andy Armstrong, his own RIAT CEO Award for an outstanding contribution to the show, went to all involved in the debut Lockheed Martin F-35 Lightning II deployment to Britain. This star attraction at RIAT 2016 involved F-35A models from the US Air Force and F-35Bs from the US Marine Corps and the United Kingdom, and was the subject of a great deal of planning by a host of individuals and organisations on both sides of the Atlantic. Andy Armstrong said: "It was an amazing display. They brought six jets, and it was an extraordinary amount of effort to bring them. We were so pleased to have them here."