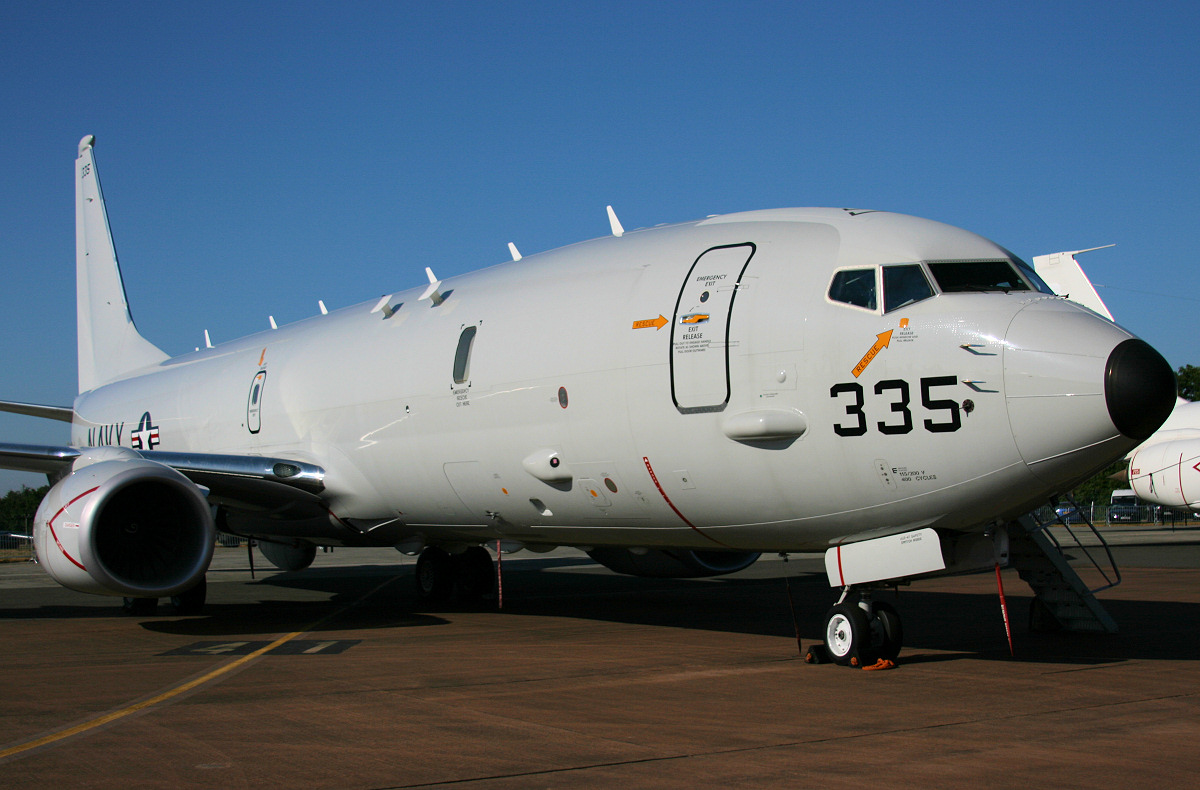 The UK are investing in nine P-8A Poseidon Maritime Patrol Aircraft which will be called the 'Poseidon MRA Mk.1' in RAF service and eventually based at RAF Lossiemouth, Scotland, after major infrastructure and runway resurfacing work is completed.

The first RAF Poseidon aircraft ('The Pride of Moray', ZP801) was officially delivered to the Royal Air Force on the 31st October 2019 and had been operating from Naval Air Station Jacksonville in Florida, by 120 Squadron. This aircraft crossed the Atlantic and landed in the UK at Kinloss Barracks on Tuesday 4th February at about 1pm. It landed at Kinloss because of major work on RAF Lossiemouth runways and airfield operating surfaces which began from January 2020. There was a dedicated area for enthusiasts outside of Kinloss Barracks where they could view ZP801 arrive. See Map.

The second Poseidon aircraft ('The City of Elgin', ZP802) was delivered to the team at NAS Jacksonville in the United States on 4th February and has arrived at Kinloss Barracks on Friday 13th March 2020.

The third Poseidon aircraft ('Terence Bulloch DSO* DFC* RAF', ZP803) has been named after the highest scoring pilot in Coastal Command in WW2. This aircraft arrived in the UK on 14th October 2020 and joined ZP801 & ZP802 at RAF Lossiemouth.

The fourth Poseidon ('Spirit of Reykjavik', ZP804) arrived at RAF Lossiemouth on Tuesday 3rd November 2020. It has been named 'Spirit of Reykjavik' in honour of the role played by the Icelandic capital and people in enabling the Allied victory in the Battle of the Atlantic. During World War II, a new airfield, seaplane base and refuelling port at Reykjavik extended the range of RAF aircraft and Royal Navy escort vessels which had near immediate effect as the German submariners lost their immunity from air attack in the North Atlantic air gap.

ZP805, which rolled out of final assembly, has been named as 'Fulmar' which tips its hat to Lossimouth's heritage as HMS Fulmar, when it briefly handed over the keys to the Royal Navy and became Royal Naval Air Station Lossiemouth! The fifth Poseidon ('Fulmar', ZP805) arrived at RAF Lossiemouth on Tuesday 2nd February 2021.

A Royal Air Force P-8 Poseidon completed its first operational mission in August 2020 when it shadowed a Russian warship in the North Sea near to UK waters. P-8 Poseidon aircraft are also supporting Border Force operations as they tackle small boats crossing in the English Channel (August 2020).

A giant Antonov AN-124 cargo aircraft touched down at Glasgow Prestwick Airport to deliver the first of two new Poseidon MRA.1 Operational Flight Trainers to RAF Lossiemouth. The Antonov An-124 arrived on Monday 17th August 2020 from Orlando, Florida.

During June & July 2020 work at RAF Lossiemouth will focus on the intersection of the two runways and Typhoon operations will be temporarily relocated with 'Quick Reaction Alert' (QRA) Typhoon located to Leuchars and routine Typhoon flying moved to Kinloss Barracks.

The sixth Poseidon aircraft (ZP806) has been named "Guernsey's Reply" and arrived at RAF Lossiemouth on 21st September 2021. The name honours the long link between the Island, 201 Sqn and Flt Lt Herbert Machon OBE. After a 10-year hiatus, 201 Squadron will return at RAF Lossiemouth later in 2021 and will be the second squadron operating the state-of-the-art Poseidon Maritime Patrol Aircraft alongside 120 Squadron.

The seventh Poseidon aircraft (ZP807) is named 'William Barker VC' in honour of the Canadian pilot awarded a Victoria Cross whilst serving with 201 Squadron in the First World War. ZP807 arrived at RAF Lossiemouth on Tuesday 19th October 2021.

By the end of 2020, RAF Poseidons will operate out of RAF Lossiemouth from the new strategic facility, maintained by the Poseidon Line Squadron and flown by 120 Squadron. All nine aircraft will be delivered by November 2021 and will form two squadrons at RAF Lossiemouth with the aircraft pooled between 120 Squadron and 201 Squadron. 54 Squadron, based at RAF Waddington, will serve as the Operational Conversion Unit (OCU). It has also been announced that the United States Navy will routinely base their P-8 Poseidon aircraft at Lossiemouth alongside British aircraft.

The role of the Poseidon MRA Mk.1 will be to protect the UK's strategic nuclear deterrent as well as the Royal Navy's two new Queen Elizabeth class aircraft carriers. The Poseidon can provide long-range maritime reconnaisance, detect and prosecute enemy submarines or ships and carries 129 sonobuoys as well as Mk 54 torpedoes and can be fitted with Harpoon anti-ship missiles on four external wing mounted pylons. It can also provide long-range search and rescue.

The P-8A Poseidon is based on the Boeing 737-800 airliner but has a strengthened fuselage for low-altitude operations and raked wingtips. It is powered by two 27,000lb CFM turbofan engines, has a top speed of 490Kts (907Km/h), service ceiling of 41,000ft and a ferry range of 4,500 miles (7,242Km). There will be about eight crew which will consist of two Pilots, two Tactical Co-ordinators (Taccos) and four Weapon System Operators (two Acoustic & two Electronic Warfare operators).

The Poseidon has a comprehensive mission system using the sophisticated APY-10 radar with modes for high-resolution mapping, an acoustic sensor system, including passive and multi-static sonobuoys, electro-optical/IR turret and electronic support measures (ESM).

A Royal Air Force Poseidon maritime patrol aircraft has released a torpedo for the first time in August 2021. In a training flight conducted over the Moray Firth a Poseidon (P-8A) aircraft operated by CXX Sqn, dropped a recoverable exercise variant of the Mark 54 Lightweight Torpedo, simulating an attack on a submarine.

RAF Nimrod
The last Maritime Patrol Aircraft operated by the Royal Air Force was the Nimrod MR1 & MR2 which were in service from the early 1970s until March 2010 and before that they operated the Avro Shackleton in this role. The Nimrod MRA4 was planned to replace the Nimrod MR2 but due to considerable delays, repeated cost overruns, and financial cutbacks, the development of the MRA4 was abandoned in 2010 as a result of the Strategic Defence and Security Review. The MRA4 had current-generation Rolls-Royce BR710 turbofan engines, a new larger wing, and fully refurbished fuselage.

Based on the de Havilland Comet, which was the world's first operational airliner, the Nimrod had four Rolls-Royce Spey turbofans, each with a thrust of 12,160lbs. The MR2 had a maximum speed of 500kts (580 mph, 930 km/h), service ceiling of 43,999ft, and range of 5,180 to 5,755 miles (8,336-9,262km) or ten hours, with around twelve or thirteen crew depending on the mission. To conserve fuel, two of the Nimrod's four engines could be shut down, once the weight was reduced by the consumption of onboard fuel. Later MR2's were fitted to receive mid-air refuelling in response to demands of the Falklands War. Unfortunately the RAF Voyager tanker is presently unable to refuel the new P-8 Poseidon as Voyager is equipped with a probe and drogue refuelling system rather than the US Air Force-standard flying boom.

The Nimrod MR2 was equipped with the EMI Searchwater radar and featured a sizeable bomb bay which housed torpedoes, missiles and bombs as well as sonobuoys. The bomb bay could also fit additional fuel tanks or be used to deploy dinghies and droppable survival packs on a search & rescue mission. The Nimrod could also be fitted with two detachable pylons mounted underneath the wings to be used with missiles such as the Martel and two specialised pylons were later added to enable the equipping of Sidewinder air to air missiles.

Other versions of the Nimrod included the Nimrod R1 which was operated by the RAF in the signals intelligence role. Three Nimrod R1 aircraft were used in this role until they were retired in June 2011 and were then replaced by three Boeing RC-135W Rivet Joint aircraft from late 2013 which are based at RAF Waddington. In the mid 1970s it was also proposed that an Airborne Early Warning (AEW) version of the Nimrod should replace the Shackleton AEW.2 but was plagued by cost over-runs and problems with its GEC 4080M computer and it was cancelled in December 1986. The Royal Air Force eventually received seven Boeing E-3 Sentry aircraft instead which will be replaced by the new E-7 Wedgetail airborne early warning and control aircraft in the early 2020s and based at RAF Lossiemouth along with the Poseidon aircraft. 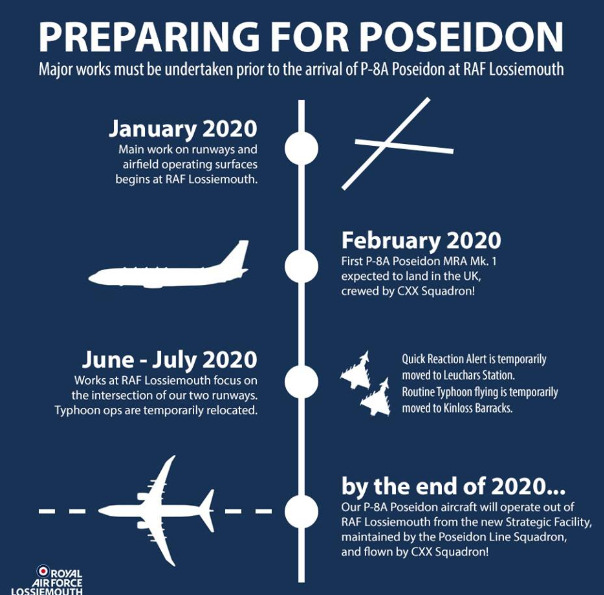 ZP801 landed in the UK at Kinloss Barracks on Tuesday 4th February at about 1pm.

ZP801 was visible on ADS-B services such as FlightRadar24 or the ADS-B Exchange. Search for aircraft type P8, registration ZP801, or the Mode S registration 43C918.

ZP801 was expected to approach Kinloss from the north east and fly over before landing. Once landed, ZP801 will hold at the end of the runway for a number of minutes.