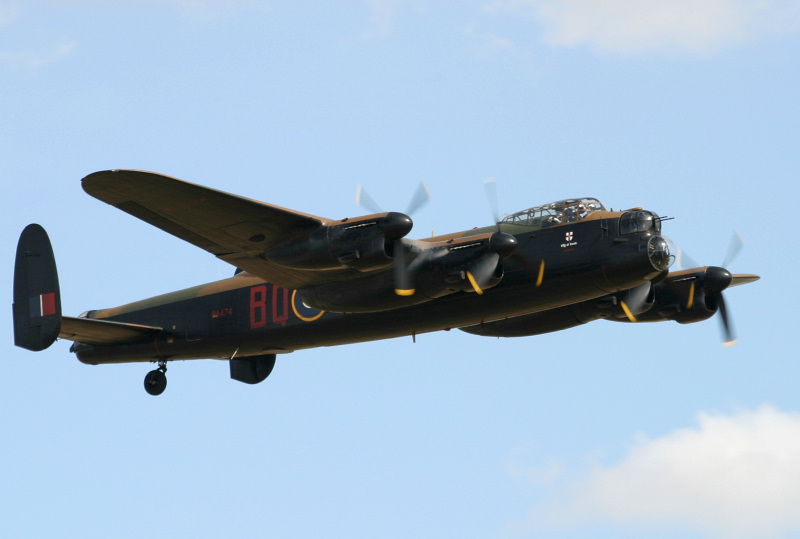 • Sadly the BBMF Lancaster had to cancel the flypast as it was too windy to risk. A 29 Sqn Typhoon was expected to replace the Lancaster but it was announced by the BBMF that it could not make it to the Derwent Dams due to poor weather at low level. However, it appears that a Typhoon did actually make a low-level pass.

The Lancaster flight will take place on the 16th May 2018, at Upper Derwent Valley, Peak District National Park, Derbyshire, and will overfly Ladybower Dam at 12.05pm.

This event will be organised by the Royal Air Force Battle of Britain Memorial Flight (BBMF).

BBMF Statement:
The Royal Air Force Battle of Britain Memorial Flight (BBMF) is scheduled to fly its Lancaster bomber down the Derwent Valley and over the Eyebrook Reservoir on 16 May 2018 to mark the 75th anniversary of 617 Squadron's raid on German dams (Operation Chastise).

Operation Chastise was an attack on the major dams of western Germany, carried out during the night of 16-17 May 1943 by Royal Air Force No. 617 Squadron, later called the Dambusters, using a purpose-built "bouncing bomb" developed by Sir Barnes Wallis. The dams of the Derwent Valley and Eyebrook Reservoir were amongst practice sites used in preparation for the raid.

Subject to confirmation, it is proposed that the Lancaster will fly over RAF Scampton (original home of the Dambusters' Squadron), the Derwent Valley, the Rolls-Royce Factory at Derby (the Lancaster is powered by 4 Rolls-Royce Merlin engines) and Eyebrook Reservoir.
Parking & Public Transport:
Unless you have special access needs, we strongly recommend travelling to the Upper Derwent Valley by public transport or car share, as parking availability will be limited. You may find the following information helpful:

• Parking will be on a first-come, first-served basis only.
• Derwent Lane will be closed to general traffic, with one side allocated for parking.
• Once parking capacity is reached, Derwent Lane will be closed to all non-emergency vehicles.
• Heatherdene Car Park will be reserved for emergency vehicles and not available for public parking.
• Areas around Ladybower will be subject to additional traffic restrictions.
• There is no overnight parking.
Police officers will be enforcing the above restrictions.

Bus information from Sheffield is available from the Travel South Yorkshire website.

The nearest railway station is in Bamford. Walking distance to Ladybower Dam is approximately 2 miles, and to Derwent Dam/Fairholmes, 5 miles.

The Fairholmes Car Park will be allocated to disabled parking only.

Coaches are by prior arrangement only with Severn Trent Water.

Alternative viewing locations:
The flight path will also take in a route to Derby, including passing over Chatsworth.

Please consider that this area is within the upland landscape of the Peak District National Park, and weather conditions can change quickly, regardless of the time of year. Suitable footwear and clothing for a range of conditions will allow you to enjoy the event safely.

There will be a strict NO DRONE policy enforced during the event.

• Official information can be found here, and on the BBMF website.

• Parking and traffic restrictions can be found here.

• Will the windspeed prevent the Lancaster Flypast to mark the Dambusters 75th Anniversary?

From the official BBMF Twitter page:
'I've just been informed that the Typhoon could not make it to the Derwent Dams due to poor weather at low level. Sadly there will be no flypast of the Derwent dam. Please focus on the amazing achievements and losses of the Dambusters 75 years ago tonight.'