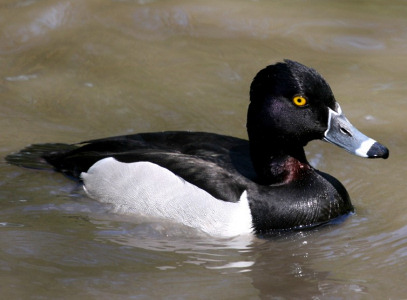 Appearance:
Male - The male Ring-necked Duck has a black head and neck with a purple sheen, an inconspicuous cinnamon neck ring, grey-blue beak with a broad white band and black tip, a distinctive white line around the base of the beak, yellow eyes, the upperparts, vent, and tail are black, the flanks and abdomen are whitish-grey, the speculum is silver-grey, and the legs and feet are grey. The male Ring-necked Duck has a similar coloured plumage to its relative, the Tufted Duck.
Female - The female has a pale brown head and body, whitish chin, throat, and around the base of the beak, white stripe behind the eye, white eye-ring, dark brown back, grey beak with subtle white band, and brown eyes.
Eclipse - The male in eclipse has a browner plumage with brown-black head, breast and back. Differs from the female by having bright yellow eyes and no eye-ring. 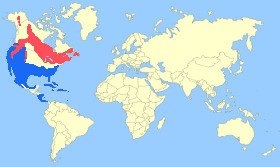 Breeding Season: - May to June.

Notes: - The Ring-necked Duck or Ringbill is a small North American diving duck. The cinnamon neck ring is actually quite hard to see but this duck differs from the Tufted Duck by having a white band on its beak and a white line around the base of its beak.