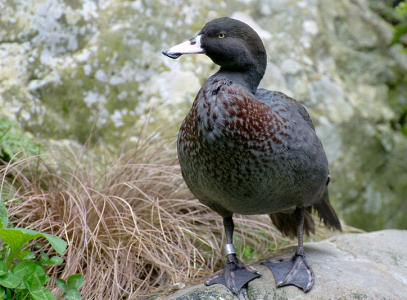 Appearance: - The Blue Duck has a bluish-grey plumage with a chestnut spotted breast, yellow eyes, a pinkish-white beak with black nail and fleshy flaps of skin hanging from the sides of its tip, grey wings, and dark-brown legs and feet. Both sexes are alike. 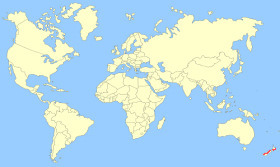 Notes: - The Blue Duck is the only member of the genus Hymenolaimus and was considered to be a Perching Duck but is now considered to be part of the Shelduck subfamily - Tadorninae. This duck is found only in New Zealand and the Maori name for this species is Whio which gets its name from the male's whistling call. The Blue Duck likes fast flowing rivers and is a strong swimmer. They nest in caves and crevices on the riverbank. This species has declined and is classed as endangered due to the introduction of mammals such as the Stoat, introduction of trout which competes for its invertebrate food, and the building of dams for hydroelectric schemes causing habitat loss. New Zealand began a ten year recovery programme to protect the Blue Duck starting in 2009.

Compare with other Duck species.