Running from May through to October, IWM Duxford's flying season brings the historic airfield to life and, this year, a jam-packed programme of events promises plenty of thrilling aerobatics, roaring Spitfires and entertainment on the ground. Tickets to all flying events for 2022 will be on general sale from today. 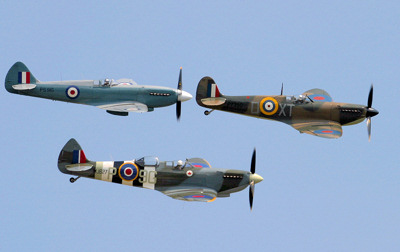 Returning for 2022, the Duxford Summer Air Show will be taking place on 18-19 June promising fun for all the family with fast-flying, all-action aerobatics and spectacular sights in the air and on the ground. The annual Battle of Britain Air Show will return on 10-11 September offering visitors an immersion into the 1940s when RAF Duxford played a pivotal role in the Battle of Britain, helping to defend the United Kingdom against Nazi air attacks. Expect plenty of Spitfire nostalgia as history is brought to life across the site for this much-loved weekend of flying entertainment.

Thanks to our friends at Aerial Collective, we are thrilled to be able to offer an exclusive prize of an unforgettable flight in a Spitfire. Any visitor who books a ticket to either Air Show before midnight on Tuesday 8 March will be automatically entered into the prize draw.

In addition to these two fantastic weekend events, the IWM Duxford Air Show team will also be welcoming visitors to its Duxford Flying Evening on 27 August to catch spectacular aircraft in flight as dusk descends over the airfield. Whilst Duxford Flying Finale on 8 October will bring together highlights from the year as we say farewell to another fantastic season of flying.

IWM Duxford's flying season wouldn't be complete without Flying Days and there will be six of these taking place between May-October 2022. From commemorating D-Day to celebrating the 25th anniversary since the American Air Museum opened at Duxford, each of these individually themed events will present aerial displays and specially curated ground activities.

IWM Air Show Event Manager, Phil Hood, said "Last year, our Air Shows were the biggest in the country and we were thrilled to welcome thousands of visitors back on site for these two fantastic weekends. For 2022, we have been working hard behind the scenes to create even more events to pack into our six-month flying season. Over the coming months there will be more announcements, including display acts and showground content, but we can say for certain that it will be a flying season to remember."