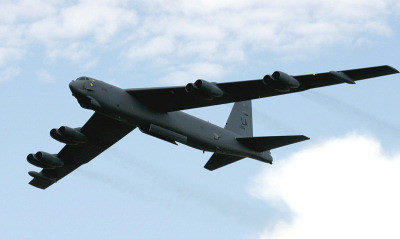 Regularly integrating with our allies improves our cooperation and operational capacity, capability and interoperability. Occurring since 2018, bomber rotations through Europe maintain our readiness to execute a wide variety of missions across two continents, sustaining peace through deterrence.

"With an ever-changing global security environment, it's critical that our efforts with our allies and partners are unified," said Gen Jeff Harrigian, USAFE-AFAFRICA commander. "We're in Europe training and collaborating together, because consistent integration is how we strengthen our collective airpower."

Through their rotation the bombers will be operating from RAF Fairford to continue to integrate with our partners and allies.

Bomber rotations reinforce the U.S. commitment to NATO allies and coalition partners to maintain our collective safety and sovereignty.

RAF welcomes back US Bomber Task Force to Europe

RAF Fighter Jets joined United States Air Force B-52s as they arrived in the UK ahead of a busy schedule of training missions with the European Command and US Strategic Command.

The strategic bombers, support equipment, and personnel from the 69th Bomber Squadron have arrived at RAF Fairford after a transatlantic flight from Minot Air Force Base, N.D, in the latest iteration of the regular Bomber Task Force Missions.

Taking place since 2018, what the Bomber Task Force deployments provide is the opportunity for the RAF to continuously improve interoperability with the United States Air Force, as well as offer RAF pilots valuable training experience with near-peer capabilities. Throughout their deployment, the United States Air Force aircraft will be based at RAF Fairford providing an ideal staging location for further integration with NATO allies. The protection of the UK Homeland through Quick Reaction Alert is just one example of national defence that is woven into maintaining regional, collective defence through this close partnership with NATO allies.

En route the US Bombers integrated with UK Joint Terminal Attack Controllers at both Cape Wrath in the North of Scotland and RAF Holbeach Air Weapons Range in the East of England, conducting bilateral Close Air Support training. The mission focused on enhancing readiness and interoperability for the controllers responsible for coordinating airstrikes to support ground forces.