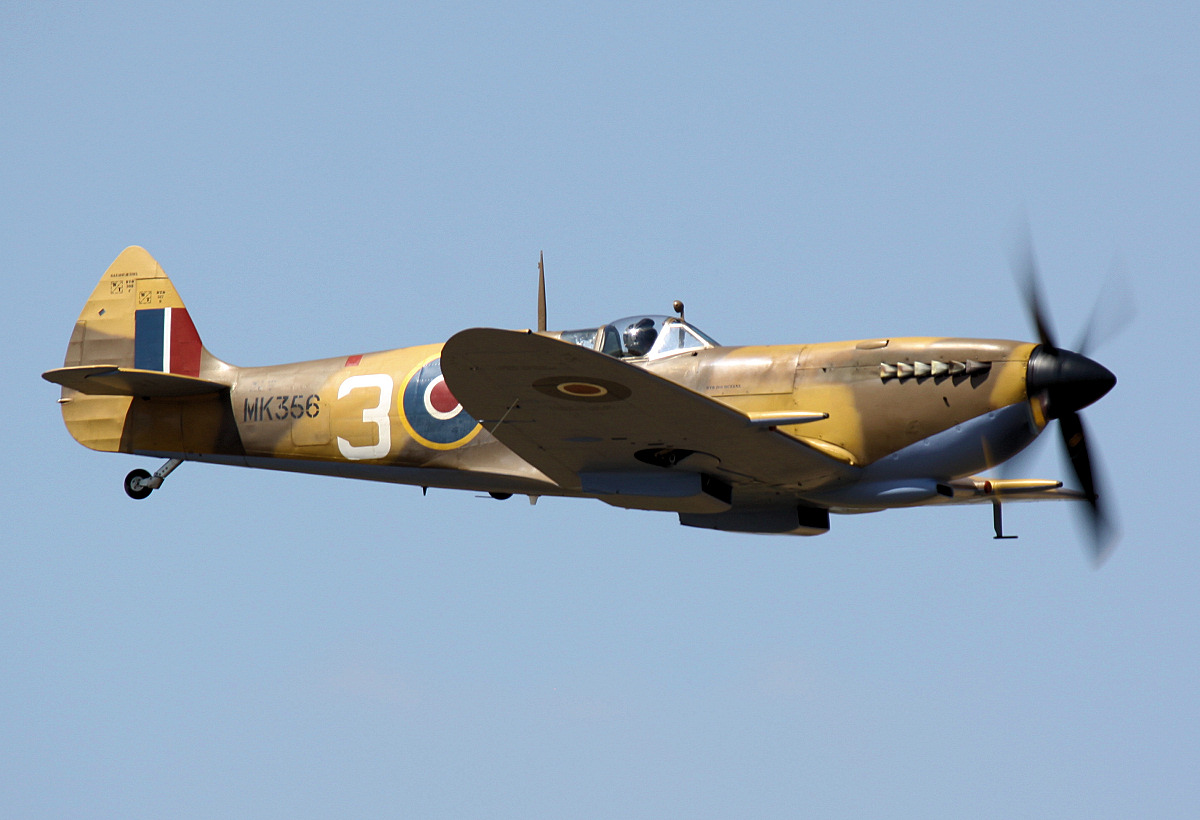 On 11th May 2022 Andy was tasked with conducting a partial flight test after rectification of an oil leak from Spitfire MK356's propeller mechanism. Having successfully completed the test, he recovered the aircraft to RAF Coningsby and before landing he carried out the normal 'brakes on, off, exhausting' test of the pneumatic wheel brakes, which are part of the pre-landing checks. This check confirms that both brakes are working, and crucially that pneumatic pressure to each brake dissipates to zero when the brake lever is released. Unfortunately, due to a very unusual failure of the brake control valve, the right-hand brake retained its full pressure, which Andy immediately noticed. He was now faced with having to land the Spitfire with the right brake potentially locked on. There is no documented drill or procedure for this failure and Andy had to rely solely on his extensive experience and deep technical knowledge of the aircraft. Spitfires are notoriously challenging in the landing phase, especially with respect to directional control; therefore, having to land with a locked main wheel created significant risk to both pilot and aircraft.

In the space of just a few minutes, Andy methodically diagnosed every potential scenario, from the fault being an indication malfunction, to the worst case that the main wheel would remain locked on touchdown. Having weighed up three possible landing options, he chose the one that would be most survivable and result in least damage to the aircraft should the worst-case situation occur. In anticipation that, if the brake was actually locked on, it would ultimately result in an uncontrollable swing to the right, he elected to land on the main runway at Coningsby which, although presenting an adverse crosswind component, offered the most run off should a runway excursion occur. His outstanding awareness and consequent management predicted where the Spitfire might end up and he asked for the fire crews to be re-positioned to safer locations. This almost certainly saved lives as his aircraft came to a halt precisely where one crash vehicle had previously been waiting.

Spitfire Mk IX MK356 after coming to rest on the grass on 11th May 2022, having been landed by Flt Lt Andy Preece with exceptional skill, with the right brake locked on.

On touch down it was immediately apparent that the right main wheel was indeed locked, but with exceptional handling skill Andy managed to maintain directional control for approximately 1500 feet of the landing roll. Video of the incident shows the tail raising rapidly after touchdown, which if not corrected immediately would have resulted in a propellor strike with the ground. Andy resisted the strong temptation to use excessive left brake to keep the aircraft straight, as again this would have resulted in the aircraft tipping forward onto its nose. Remarkably, he managed to keep the aircraft on the runway until it had slowed to about 30 knots and rudder authority was lost, at which point the aircraft turned right onto the grass at the side of the runway and entered a slow-speed ground loop. As the aircraft left the runway, Andy had the capacity to turn the ignition off to further protect the aircraft. The Spitfire was undamaged apart from a badly flatted right tyre and, after the faulty valve had been changed, the tyre replaced and checks of the undercarriage had been carried out, MK356 was back flying again.

The Green Endorsement cites Andy's clarity of thought, exemplary handling skills and impeccable airmanship, which saved a priceless aircraft, avoided any injuries and resulted in an almost perfect outcome.