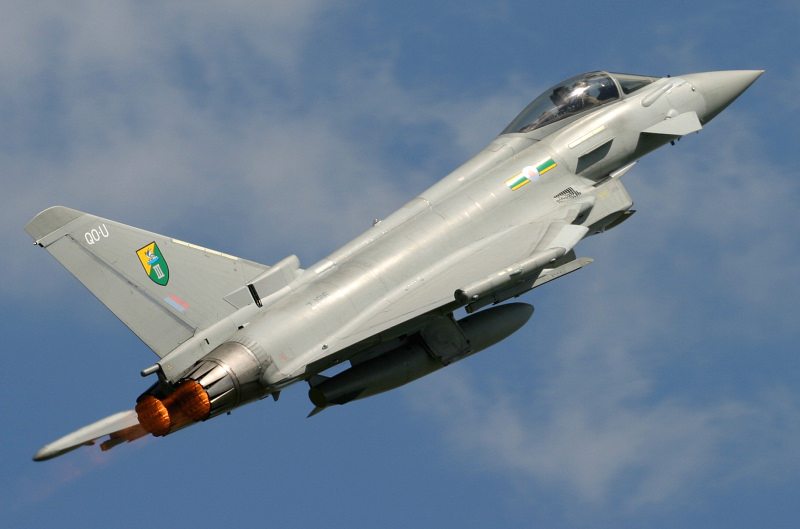 This article will look at how the Strategic Defence and Security Review (SDSR), which was published in March 2021, will affect the Royal Air Force.

Prime Minister Boris Johnson described the SDSR as "the largest review of its kind since the Cold War" and the review sets out the government's vision for Global Britain, the UK's role in the world following its withdrawal from the European Union.

• Details of the Strategic Defence and Security Review can be downloaded and read here.

Typhoon:
All twenty four RAF Typhoon Tranche 1 aircraft will be retired by 2025, however the Royal Air Force will 'fully establish all seven operational Typhoon Squadrons' which will be continually upgraded with new weapons such as the UK-developed 'SPEAR Cap 3' precision air launched weapon and will also invest in the Radar 2 programme to give the Typhoon a powerful electronically scanned array radar. RAF Typhoons are currently based at RAF Lossiemouth in Scotland and RAF Coningsby in Lincolnshire.

F-35 Lightning:
The RAF F-35B Lightning force size will be increased beyond the 48 aircraft that have already been ordered. More UK weapons will be integrated into the aircraft and investment will ensure that its software and capability are updated. RAF F-35B Lightnings are based at RAF Marham in Norfolk. More information on the UK's F-35B fleet can be found here.

Hawk T1:
The RAF Hawk T1 is expected to be retired on the 31st March 2022. These aircraft are operated by 100 (aggressor) Squadron based at RAF Leeming in North Yorkshire and 736 Naval Air Squadron (NAS) at RNAS Culdrose in Cornwall, which is a Royal Navy Maritime Aggressor Squadron, providing simulated attacks against Royal Navy & NATO warships, although 736 NAS Squadron is expected to disband on 30 September 2021. The Red Arrows also operate the Hawk T1 aircraft but the Ministry of Defence said they are 'committed to supporting the Red Arrows' and they are expected to operate the Hawk T1 until at least 2030. The Red Arrows will move from their current base at RAF Scampton and relocate to RAF Waddington before Scampton closes in late 2022.

C-130 Hercules:
The C-130 Hercules will all be taken out of service by 2023. The A400M Atlas force will increase its capacity and capability, operating alongside C-17 Globemaster and Voyager transport aircraft and tankers. All these aircraft are currently based at RAF Brize Norton in Oxfordshire.

BAe 146:
The four RAF BAE 146 aircraft will be retired by 31st March 2022 and are currently operated by 32 (The Royal) Squadron based at RAF Northolt in London. These aircraft are primarily tasked to transport senior government ministers and Ministry of Defence (MOD) personnel and also senior members of the Royal Family. Replacements for these aircraft are currently under consideration and the fleet of Voyager aircraft also include VIP transport tasking.

E-3D Sentry:
The RAF E-3D Sentry will be retired in 2021, as part of the transition to the more modern and more capable fleet of three E-7A Wedgetail aircraft in 2023. The RAF were initially expected to receive five Wedgetail aircraft but this has now decreased to three aircraft. The E-3D Sentry is currently operated from RAF Waddington but the E-7A Wedgetail will be based at RAF Lossiemouth alongside the new Poseidon P8 Maritime Patrol Aircraft. On 30th July 2021, the RAF E-3D Sentry flew its final operational mission which saw it supporting the Queen Elizabeth Strike Group Pacific Deployment, Op Shader and NATO assurance missions - it returned home to RAF Waddington for the last time on Wednesday 4th August 2021 at about 3pm. Full story: https://bit.ly/3xkhDyg

Protector Remotely Piloted Systems:
Sixteen long-range Protector Remotely Piloted System aircraft will replace the current MQ-9A Reaper unmanned aircraft. The Protector is to start entering service by mid-2024. Protector is the world's first certified Remotely Piloted Air System, which enables it to fly in busy, unsegregated airspace, including civilian airspace, thanks to its ground-breaking 'sense and avoid' technology. This will permit Protector to fly in all UK airspace safely and is certified against stringent NATO and UK Safety Certification standards equivalent to manned aircraft. The Royal Air Force is to fully integrate Protector operations into RAF Waddington where it will operate alongside the based fixed wing aircraft. More information on the UK's Protector can be found here.

Chinook Helicopter:
Some of the oldest Chinook helicopters will be retired and replaced by newer variants which will enhance capability and have extended range. The RAF have around 60 Chinooks based mainly at RAF Odiham in Hampshire.

Future Combat Air System:
There will be a strategic investment of more than £2bn, over the next four years, in the Future Combat Air System (FCAS). FCAS will deliver an innovative mix of crewed, uncrewed and autonomous platforms including swarming drones. This will deliver an advanced combat air system capable of fighting in the most hostile environments. The investment will allow the next phase of the FCAS Acquisition Programme to design and deliver the Tempest Concept to create a 6th generation combat air enterprise centred in the UK.