AUDIENCES in the UK will enjoy shows featuring the Red Arrows for the first time in almost two years after the team was given display approval. 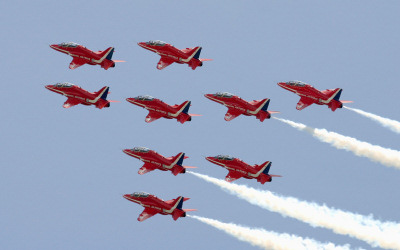 Known as Public Display Authority (PDA), this marks the start of the Red Arrows' 57th season.

It means the team is set to perform at events in the UK for the first time since July 2019 - with airshows returning to this summer's calendar, after the pandemic forced event organisers to cancel dates last year.

The former Typhoon pilot, who flies as Red 1, said: "I am hugely proud of what the whole team has achieved in being awarded Public Display Authority and being ready to perform for people in the UK, and beyond, across the new season.

"This is the culmination of several months of hard work and everyone's dedication to the task has brought us to this point, whether they be fellow pilots in the team or our highly-trained support staff. 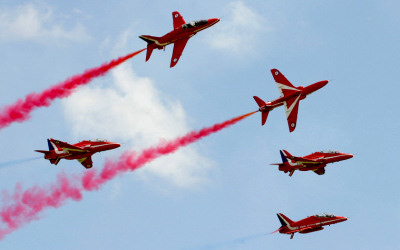 "Being my first PDA as Red 1, I feel incredibly honoured to have led the team to this point and to now have the opportunity to present a new show - featuring all the energy, excitement and excellence that airshow audiences expect and enjoy.

"We are all thrilled to bring the aerobatic display to our home audience for the first time since 2019 - showcasing the Royal Air Force and representing the UK.

"Indeed, one of the most rewarding aspects of being a Red Arrows pilot is displaying in front of audiences wherever we are around the world and getting to meet people at different locations."

Attaining PDA involves detailed scrutiny of activity both in the air and on the ground and is only granted when the Red Arrows are deemed to have a show that is safe and visually-appealing.

It follows months of winter training in the UK, at the team's home base of RAF Scampton in Lincolnshire.

Preparations then moved abroad, in a deployment called Exercise Springhawk.

This five-week period, staged in Greece, is where the team perfects and polishes its display and flies up to three-times-a-day - taking full advantage of more guaranteed, finer weather and other settled conditions.

Sqn Ldr Bould, who was previously a team pilot in the Red Arrows between 2015 and 2017, is responsible for leading the nine-aircraft formation, choreographing the display and coordinating the training programme. 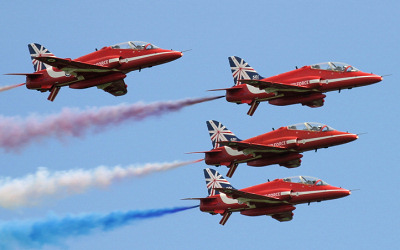 Speaking about the new 20-minute aerobatic show, he said: "This year we are displaying some of the biggest shapes in our inventory, including Swan and the Big Vixen Roll with all nine jets just six feet apart, while rolling upside down.

"Hammer Head Break is back, which is a slightly different way to start the second half of the show with an arena-filling spectacle.

"The Synchro Pair - Reds 6 and 7 - will perform the Boomerang, which is a brand-new manoeuvre for 2021 and we will also recognise the dedication of the NHS and key workers in the UK, with an all-blue-smoke-trail present in Slalom."

The Red Arrows' opening display of the new season will be on June 4 at the Midlands Air Festival - the first event of a four-month summer campaign spanning the UK and mainland Europe.

The last time a UK audience saw the Red Arrows perform an aerobatic show was at the Royal International Air Tattoo in July 2019.

After that, the team carried out a highly-successful 11-week tour promoting UK interests across North America, before the pandemic hit planned events in 2020.

This meant the Red Arrows carried out just three public displays, in Finland and Guernsey, compared to a normal schedule of more than 70 shows. Although, even without displays, the team remained extremely busy and visible, with several major flypasts - including marking the 75th anniversaries of VE and VJ Day.

There was also a vast online outreach programme, linking-up with schools, cadet groups and virtual airshows exploring themes around leadership, teamwork and the STEM subjects of science, technology, engineering and maths. 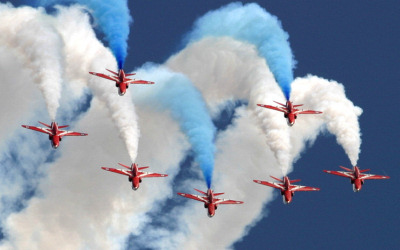 Wing Commander David Montenegro, Officer Commanding, Royal Air Force Aerobatic Team, said: "Over the last 12 months, from the high-profile flypasts to the countless remote, virtual sessions we've participated in as a team, it's been clear that people's enthusiasm and desire for bold, colourful displays and enjoying precision flying is stronger than ever.

"The team's aim for this season is to be an exciting part of airshows as families come back together this summer, up and down the country.

"The Red Arrows will be part of that story and, through a demonstration of teamwork and the best of British, hope to inspire people of all ages and backgrounds."

PDA follows a thorough assessment by a senior RAF officer.

The Royal Air Force's Air Officer Commanding, 1 Group, Air Vice-Marshal Al Marshall OBE MA RAF, scrutinised all aspects of the team, on the ground and in the air.

This is to ensure the team satisfies the highest safety standards and is performing a display that is a credit to both the Service and UK.

Following the approval, the pilots changed from their green coveralls, used during training, into their famous red flying suits, which are worn during display season.

Beginning with small groups of three or four aircraft flying together, training for 2021 began in October last year at RAF Scampton. 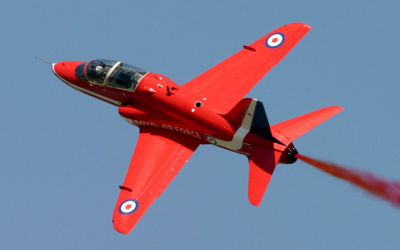 Pilots fly three times a day, five days a week - until the team's full nine-ship formation came together in March.

Each sortie follows the same two-hour cycle of pre-flight briefing, the flight itself and a thorough, analytical debrief. The aim is constant improvement.

There is a big team effort needed to allow the Red Arrows to perform for the public, from flight operations personnel and engineering technicians to administrators and suppliers.

The support staff, who number more than 100, also changed their coveralls following PDA, into their royal blue flying suits, giving them their collective name - 'the Blues'.

An up-to-date list of airshows and events where the Red Arrows will be performing in 2021 is available on the team's website.