Many UK Airshows and aviation events have been cancelled this year (2020) due to the Coronavirus (COVID-19) pandemic. 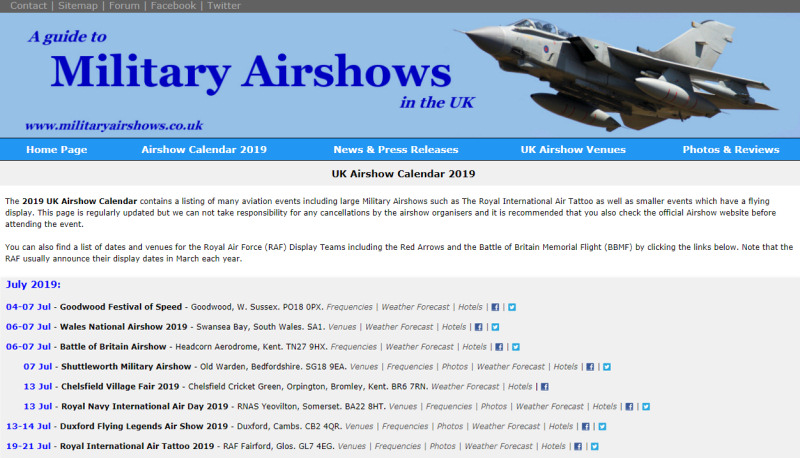 A list of airshows/events can be found on the UK Airshow Calendar Page and airshows affected by this virus will be highlighted as soon as the event organiser's declare that the show is cancelled or postponed.

As usual, it is always a good idea to visit the official event's website or social media pages for the latest news before attending an airshow or aviation event.

Many shows have already cancelled their events or postponed them to later in the year in the hope that restrictions will be eased. Below is a list of some of the larger or more popular shows that have been cancelled or postponed:

Despite the lack of air shows there have been a few flypasts which have proved quite popular. Unfortunately the flypast for the Queen's Birthday on 13th June was cancelled but the following flypasts are taking/took place:

Information on flypasts can be found on the following pages:

On the 18th July 2020 the first air show to take place was the 'Shuttleworth Evening Airshow Drive-in' at Old Warden and after the success of this event it was decided to add more drive-in events. Duxford had planned to go ahead with the 'Battle of Britain Air Show' on 19th-20th September 2020 and even added a 'Battle of Britain Proms' to Friday 18th September but it was unfortunately cancelled due to the virus. Duxford have added a few 'Showcase Days' on 4th August, 19th August & 10th October. The Guernsey Battle of Britain Air Display did go ahead as planned and included an air display by the Red Arrows on the 10th September although the Jersey Air Display which was to have taken place on the same day was cancelled.

During this difficult time we should all give thanks to the people working on the frontline and especially the Nurses and Doctors of our National Health Service (NHS).

We should also thank Captain (Colonel) Tom Moore, a WWII veteran who has raised millions of pounds for the NHS and was rightly honoured on his 100th birthday (30 April 2020) with a flypast of two BBMF aircraft (Hurricane LF363 flown by Sqn Ldr Mark Discombe and Spitfire MK365 by Flt Lt Andy Preece) as well as a flypast by an AAC Apache & Wildcat helicopter, over his home.

The military have also played their part by flying in Personal Protective Equipment (PPE) and helping to distribute it around the country as well as helping to establish temporary hospitals and assisting with a variety of tasks to support the NHS and other public bodies.

Chartered civilian flights have also been used to deliver resources and repatriate Britons stranded across the globe. Below are some photos (Paul Wallis) of an ex-Virgin Atlantic Airbus A340-600 operated by European Aviation, having been chartered by the UK Government to fly Special PPE from China & Malaysia via Bournemouth Airport, into the UK.