This summer will mark 80 years since the German Luftwaffe began its long series of air attacks, signifying the start of the Battle of Britain. IWM Duxford is pleased to announce that it will be opening its doors on Saturday 1 August, offering visitors the chance to tread the same ground as the young fighter pilots and operational staff of 1940 at this former sector station and participate in a season of new exhibitions and events to commemorate the Battle of Britain 80 years on. 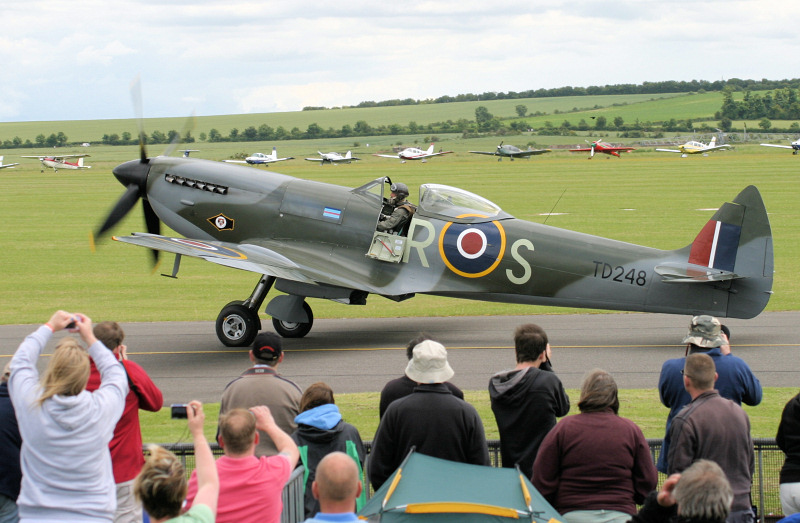 Re-opening of IWM Duxford
The doors to IWM Duxford have been closed for over four months but, from Saturday 1 August, they will re-open once again to welcome members of the public back to Europe's largest air museum. Visitor numbers to the historic site will be limited to ensure the safety of staff and visitors and those looking to visit should book tickets online in advance for an allocated time. IWM Members will receive access to priority booking from Friday 10 July with public bookings opening on Wednesday 15 July.

New Exhibition Openings
Originally scheduled to open in July, The Ops Block: Battle of Britain will now open on 15 September, the anniversary of the day the Battle of Britain reached its climax. The exhibition will grant the public access to newly transformed and previously unseen historic Second World War rooms. Visitors can step foot into the former nerve centre of RAF Duxford to discover accounts of those who lived and worked here and immerse themselves in a multi-sensory recreation of the Ops Room, experiencing the tension felt on the ground on 15 September 1940. Visitors can explore three dedicated 'people stories' rooms and learn about the Women's Auxiliary Airforce, controllers and pilots who served at RAF Duxford. The newly transformed Battle of Britain Exhibition will also reopen on 15 September, featuring iconic Second World War aircraft, interactive displays and Duxford-specific stories. The exhibition will also explore Duxford's shared history with the Supermarine Spitfire as the base of the first operational Spitfire squadron. An airworthy Spitfire will be displayed in the hangar while a replica, positioned outside between the hangar and newly opened Ops Block, will complete the visitor experience.

Duxford Battle of Britain Air Show
Despite the cancellation of two air shows earlier in the year, IWM Duxford's annual Battle of Britain Air Show will be taking place as planned on Friday 18 - Sunday 20 September. With tickets now limited in order to ensure social distancing, Duxford Battle of Britain Proms has been added to the event schedule on Friday 18 September with afternoon flying entertainment followed by a concert featuring The D-Day Darlings. On the ground, there will be vintage fairground activities and market stalls, military vehicle displays, bunting workshops, flight line walks and plenty of music and dancing. Spitfires, Hurricanes, Mustangs and other remarkable aircraft will take to the skies for spectacular flying displays and sunset flypasts. As one of the only air shows taking place in the UK this year, Duxford's Battle of Britain Air Show is a summer must-see in this commemorative anniversary year.

Battle of Britain Events
This summer and autumn will also see IWM Duxford host a number of new Battle of Britain events and activities including bespoke tours, photography workshops and panel discussions. Highlights include the Life and Death in the Battle of Britain walking tour with IWM historian Carl Warner, who will provide an insight into the psychological pressures young fighter pilots faced in the summer of 1940, and a panel discussion with author, historian and broadcaster James Holland. There is also the chance to sit in the cockpit of an airworthy Mk1a Spitfire or gain after-hours access to the site for Battle of Britain 80: The Night Shoot for an opportunity to capture Duxford's historic buildings and airfield through your camera lens. For a full list of events, please visit the IWM Duxford website.

IWM Books and Gifts
To coincide with this momentous anniversary, IWM Shop launches a new range of Battle of Britain inspired products which will be available to purchase online and in our new Battle of Britain gift shop at IWM Duxford. Items include a luxury, leather holdall with Spitfire lining, a Spitfire fountain pen made from the metal of a 1940 Battle of Britain Spitfire P7350 and an exclusive limited-edition W T Author No 1940 watch, inspired by aircraft gauges of the Battle of Britain era. IWM will also be releasing its seventh title in its Wartime Classics fiction series, Squadron Airborne by Elleston Trevor (author of The Flight of the Phoenix). Set for publication on 10 September, this fast-paced novel has been brought back into print by IWM and focuses on one week at a fictional fighter station during the height of the Battle of Britain, inspired by the author's personal experience as an RAF engineer. For full details of IWM's product ranges and publications, please visit the IWM Shop.

Battle of Britain Artworks
To mark the Battle of Britain 80th anniversary, IWM will be working with partners to proactively loan from its rich art collection for the first time thanks to the generous support of the Art Fund . Three Battle of Britain artworks will be displayed at four distinctive venues, alongside unique works from our partners' collections, with each display exploring and illustrating a different and locally-relevant perspective on Second World War aviation. From August, 'An Aerial Battle' by Francis Dodd, 'Squadron Leader G L Denholm, DFC' by Thomas Cantrell Dugdale, and 'Untitled' by Eileen Agar will tour between Russell-Cotes Art Gallery & Museum in Bournemouth, the Harris, Preston, The Collection in Lincoln and Touchstones Rochdale. Each partnership display will be complemented by an associated events programme. As the Battle of Britain raged in the skies in the summer of 1940, a range of artists were quick to record and interpret this vital event, many of whom were commissioned by the War Artist Advisory Committee. Highlights from IWM's collection include 'Battle of Britain' by Paul Nash, 'Fitters Working on a Spitfire' by Raymond McGrath and 'Corporal J. D. M. Pearson GC, WAAF', by Laura Knight which is displayed in the Lord Ashcroft Gallery at IWM London.